My current publisher (Ulysses Press) recently received a large order for all three of my survival-related books from Costco Stores.  Since these big chains are able to buy in volume, they negotiate for big discounts which they are able to pass along to the customer.  Generally, Amazon has the best prices on most books, as they too buy and sell in volume, often making very small profits per copy.  But if you live in an area where there are Costco locations and prefer to shop in person rather than online, you may get an even better deal.

I don’t have access to a Costco store here, as there are none in Mississippi, but a friend sent me this photo taken with his phone last week from one of the stores in the Los Angeles area.  They had plenty of copies of Bug Out, Bug Out Vehicles and Shelters, and Getting Out Alive, all priced at just $8.99 per copy, which is a significant discount off the cover prices of $14.95 and $15.95: 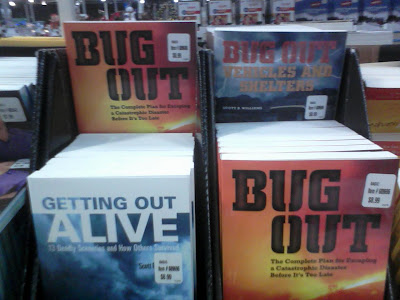 I don’t know if every Costco store has these in stock, but I’m pleased to see them offered by the chain, as they have a limited selection of books to begin with.  The fact that they chose to carry all three of these titles is evidence of the growing popularity of preparedness topics in general.